Fall’s here–it definitely feels like it–which also means we saw the famous Chicagohenge and all the blurry photos of the event that clog your social feeds. Now that you’ve surfed through those, clear your mind with the latest political news, including:
• Greg Hinz on one state lawmaker’s proposal for pension reform–and property tax relief.
• A mayoral hopeful unveils his plan for Chicago schools.
• The latest wrinkle in the drama over Dan Proft’s anti-Pritzker mailers.
State lawmaker pushes pension reform tied to property tax relief: Today’s Juice, by Greg Hinz

Is the state really making progress paying down its huge pension debt?
Democratic Gov. J.B. Pritzker and GOP gubernatorial nominee Darren Bailey have been arguing about that for a while on the campaign trail, with financial experts divided on how to handle what still is at least $130 billion in unfunded liability. Now a little evidence favoring Pritzker’s view is coming from state Rep. Mark Batinick, a Plainfield Republican.
Batinick this week has been publicizing a new bill that would reallocate some money from pension payments to local property tax relief.
RELATED: Crain’s Forum: Pensions
Under the legend “Why have we turned the corner on pensions?” Batinick’s fact sheet on his plan notes that more than half of current state workers now are in the cheaper Tier 2 pension system that went into effect for those hired after Jan. 1, 2011. Beyond that, he says, the state has steadily ramped up its payments, and investment returns on those payments have increased.
Combined, that means that, as a percentage of overall state general funds (operational) spending, pension payments have peaked, dropping from over 29% a few years ago to a projected 20% or less within a decade, he says, citing state data (see below or page 165 here). 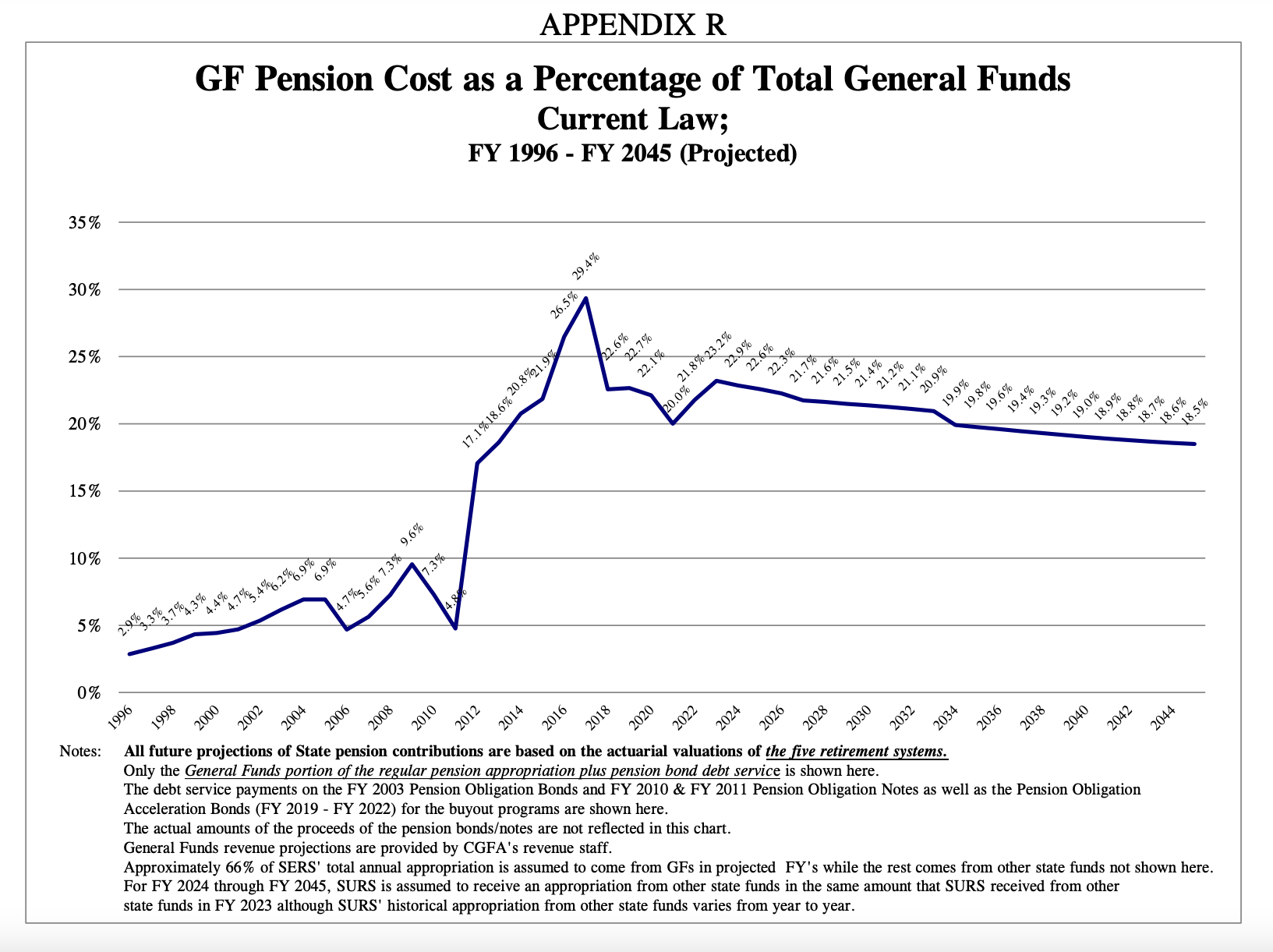 Rather than “fritter away” those savings, Batinick would dedicate a chunk toward property tax relief. Specifically, in any year in which required pension spending drops below 25% of total general funds spending, an amount equal to a quarter of the drop would automatically be used to reduce property taxes.
Bottom line, the plan “would ensure as the pension payment drops, so would the overall property tax burden,” he says.
Batinick’s proposal drew a mixed reaction from Laurence Msall, head of the watchdog Civic Federation.
“What happens if the state’s pension contribution increases to above 25% of the budget?” if, for instance, stock market returns go down as they are this year, Msall asked. “We see some significant potential positives in the proposal, but also have questions about whether it will work as indicated if the state economy slows or slips into recession in the coming years.”
Either way, the proposal definitely differs from the gloom-and-doom coming from Bailey and other Republicans. “I do my own math,” Batinick replies. “I want to make sure homeowners get help.”
Mayoral candidate Rep. Kam Buckner outlines plan for schools, by Greg Hinz 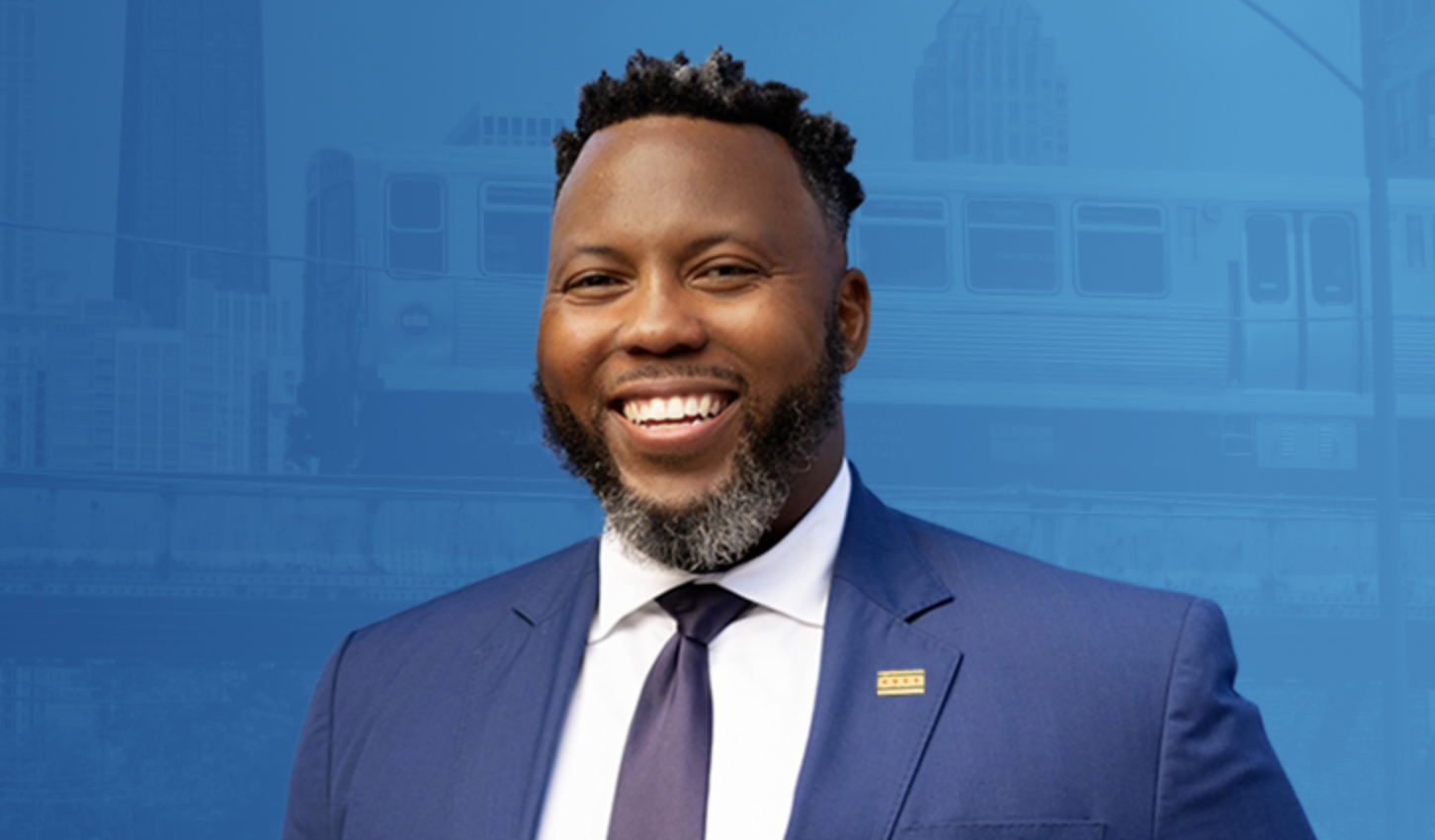 Mayoral hopeful State Rep. Kam Buckner is out with his plan for schools. It features:
Buckner is an ally of the Chicago Teachers Union and many of his proposals parallel positions the union has taken. For his plan to work, CPS will need an additional $436 million a year from the state, but Buckner said he’s working on that.
RELATED: Chicago Mayoral Candidate Tracker
One other position of note: Buckner said that he will commit to “hands-on direct contract negotiations” with the CTU. That would be a sharp change from Lori Lightfoot and other mayors who, in recent decades, have barraged school officials and a labor lawyer and not been at the table themselves.
In other news, by Marcus Gilmer
• Delivery robots on the way: On Wednesday, the City Council approved the expansion of a pilot program using delivery robots in parts of the city, just one more step to the robot uprising.
• State Supreme Court rejects back pay: The Illinois Supreme Court rejected a lawsuit filed by two former state legislators who sued for back pay they believed they were due for raises that they voted against while in office.
• Braun for guv in Indiana? U.S. Senator Mike Braun (R-IN) indicates that he’ll throw his hat in the ring for governor in Indiana in 2024, a move that would prompt a scramble for his then-open senate seat.
• CPS enrollment dips again: The slide in CPS enrollment continues as the system falls to 321,000 students this school year.
One more thing: Pritzker bails on Daily Herald forum over Proft papers 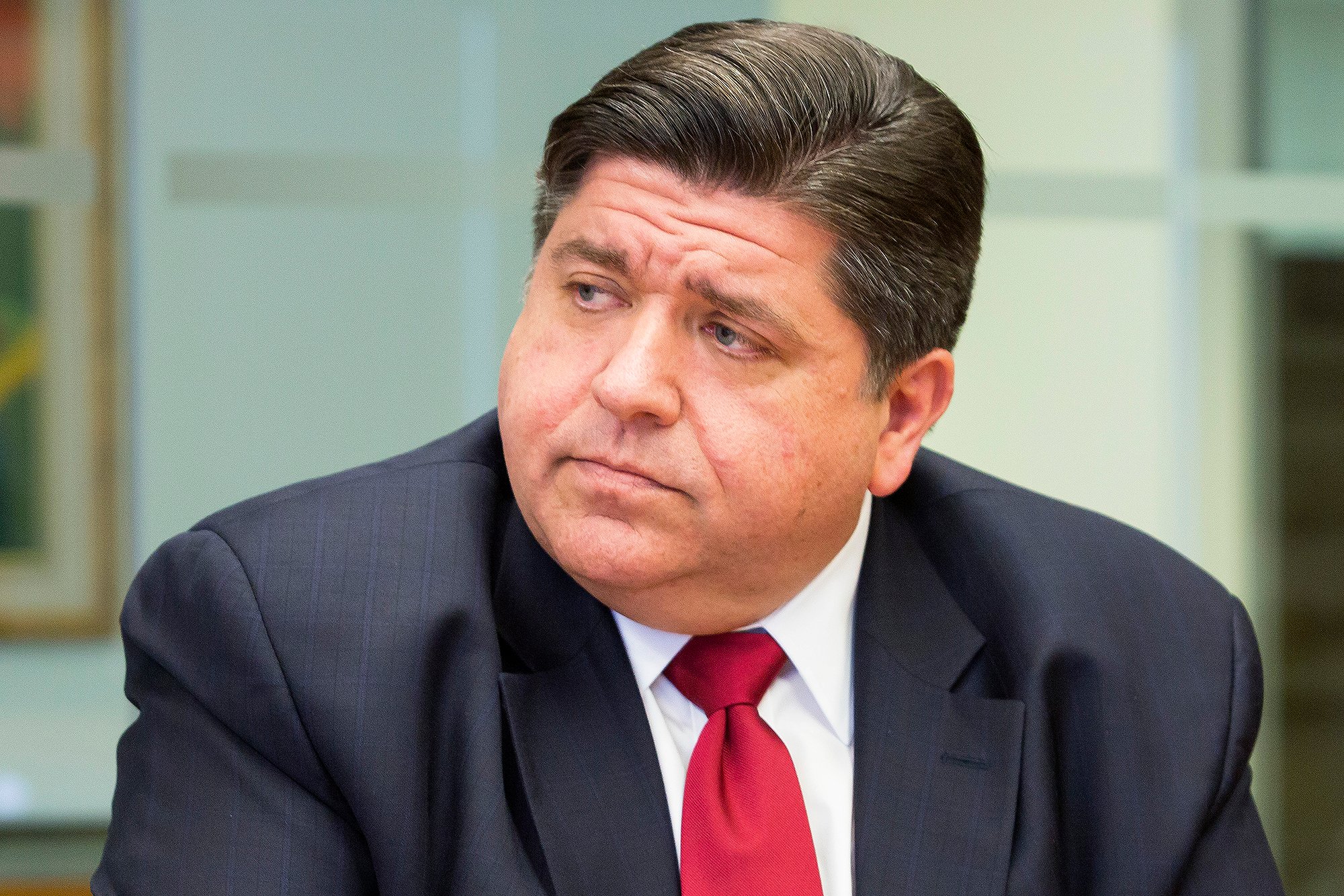 Governor J.B. Pritzker has pulled out of a Daily Herald candidate forum alongside GOP nominee Darren Bailey and for good reason: the Daily Herald’s corporate owner, Paddock Publications, has allowed conservative activist Dan Proft to use its postal permit to send anti-Pritzker mailers to voters.
In a letter to the Herald, the Pritzker campaign said:
“We simply cannot participate in a forum organized by the same organization that seems to have willingly shared a postage permit with a partisan political entity dedicated to slandering the governor and his policies,” the letter states. “Moreover, we believe that Paddock owes it to Daily Herald readers to publicly disclose exactly what arrangements were made” with Proft and his company, Local Government Information Services.
The move by Pritzker prompted a response from the publisher, too, that ended with Paddock ending the publishing deal with Proft and asking Pritzker to reconsider. Greg Hinz has more on the latest development in the Proft mailer drama here.
Staying current is easy with Crain's news delivered straight to your inbox, free of charge. Click below to see everything we have to offer.
Get the best business coverage in Chicago, from breaking news to razor-sharp analysis, in print and online.